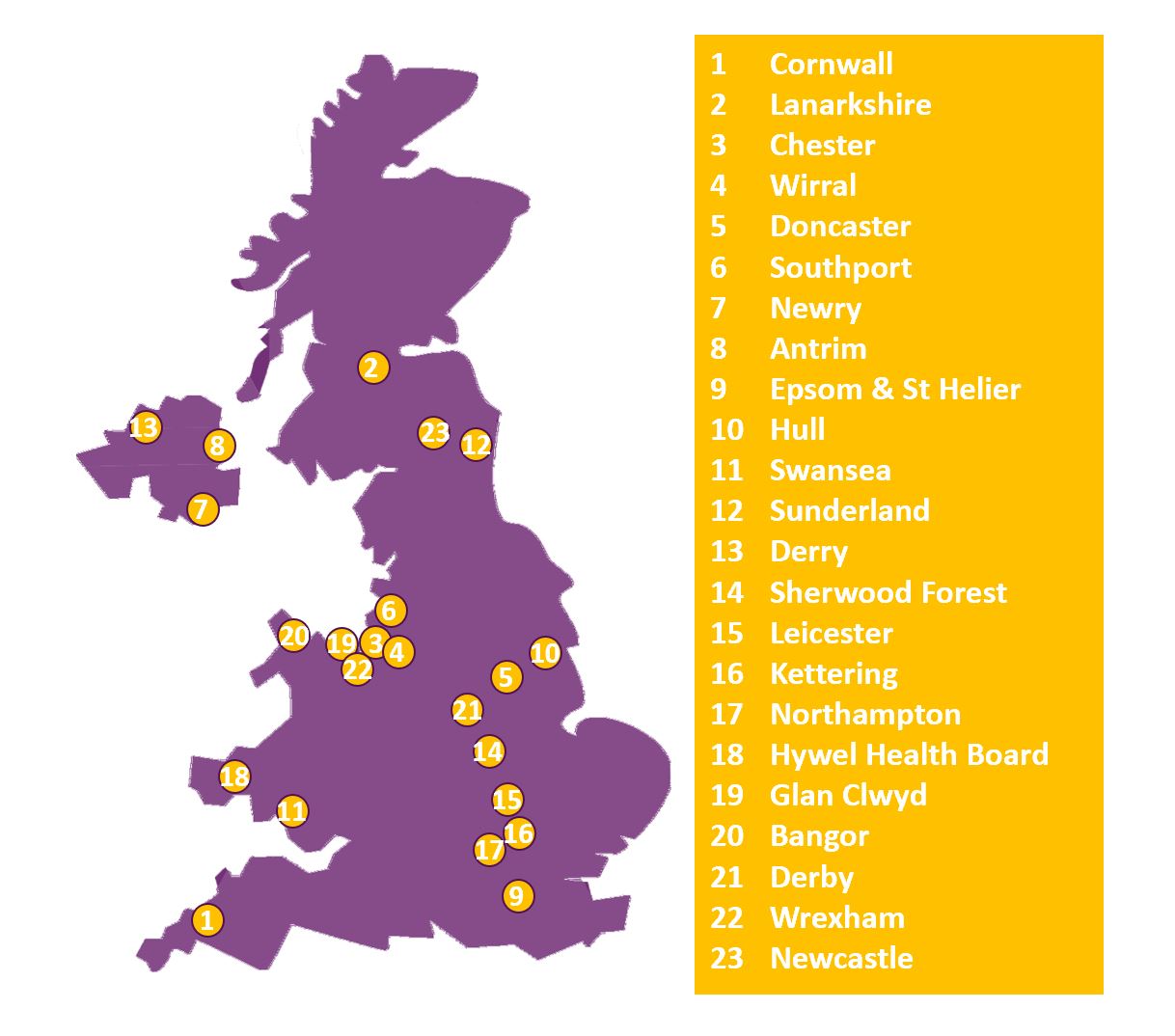 The ASSIST-CKD quality improvement project, was managed by Kidney Research UK and supported by The Health Foundation, and focused on scaling-up an intervention that reports kidney function (eGFR) graphs over time to primary care. The aim was to identify patients at highest risk of CKD progression - a simple concept which not only offers value for money but also a real chance to improve renal patient journeys.

The project involved over twenty renal units and pathology laboratories and their surrounding GP practices, covering an estimated population of 11-12 million people in England, Scotland, Wales and Northern Ireland.This website was provided for participating sites when the project was active and is structured so that it is possible to access software, supporting documents and other materials that were needed by sites carrying out the project.

This site remains active following the successful completion of the project so that materials and software from the project can still be accessed by any NHS sites who wish to continue or any sites who were not involved in the project but are interested in the methodology and tools.

Quality improvement at scale: evaluation of the drivers and barriers to adoption and sustainability of an intervention to reduce late referral in chronic kidney disease

Over the most recent version from HEFT (v2.2), ASSIST-CKD version 4 carries a number of benefits and a couple of useful new features. These benefits can be broken down into four categories:

Modern: The work to date provides an updated, web-like User Interface which brings ASSIST-CKD into the modern age of best design principles and ergonomic design.

Simpler: As a benefit of following modern design principles, in v4 it should be clearer at first glance what each screen is for, where the important areas are and what each input/button does. The inclusion of tooltips and popups allows in-app documentation of critical areas.

Clearer: Graphs are now clearer to view, with the ability to hover over data points to more accurately see the test results. The ability to zoom in and zoom out on a specific location allows the user to gain a more accurate understanding of the patients test history.

Deployment: v4 is built to deploy in more locations, in more environments, with less fuss. The setup of ASSIST-CKD is now self-explanatory and contained within the application itself - no more configuration files or Control Files, or post-install configuration required.

Database Options: v4 implements connections for three different types of database. Where v2.2 only supported Microsoft SQL Server (MSSQL), v4 will support SQLite and MySQL. This allows greater flexibility for the trusts in choosing the database the application will run on. it can be local, remote, and of a proprietary or open format depending on the individual site’s budget.

Error Reporting: In v2.2, it was common to find errors which went unexplained. V4 aims to report on errors accurately so that problems can be solved faster.

Installation: v4 works with the same data set as v2.2. This means that v4 can be installed at a site already using v2.2 with no loss of data or time-consuming upgrade procedure.

Upgrades: Upgrades to both the database and the application are now automated making rolling out new versions/features far easier than in previous versions.

Large Data Sets: A common issue logged against v2.2 is the application's performance when dealing with large data sets and while outputting graphs. For v4, this problem has been taken into consideration at the ground-level of development. The algorithms have be re-written to best utilise the performance of the database engines.

User Efficiency: Alongside application performance, the user’s ability to work efficiently impacts the overall performance of the project. The aforementioned benefits in design and usability will also allow the user to perform better while using v4. With a more modern and less confusing interface, simpler deployment with less restrictions; and clarity when it comes to errors; the user can get to analysing and reporting on the data quicker and easier than before, and fix problems if they arise with confidence.

Accuracy: v4 improves upon v2.2’s finer details such as what happens when you specify an age range for reporting results. Where v2.2 would only use the year of birth to determine a patient’s age, v4 will compare the actual dates. Another such improvement is in the “check previous” functionality, which turned out to not work quite as expected. These improvements should serve to provide more accurate results while analysing; reducing the workload where possible without skipping over patients who need attention.

The ASSIST-CKD software, initially developed for internal use at HEFT, has been incrementally improved and released under a number of versions. The major version of the application (v2, v3, and v4) indicates the phase of development.

Major improvement to graph construction, display and behaviour; including large alterations to x-axis consistency between patients and fixes for graph zoom and pan functionality. Aimed at improving at-a-glance analysis as a quality of life update for all involved Trusts.

ASSIST-CKD Version 2 was developed internally at HEFT as a proof of concept and had a limited distribution to select Trusts. This phase set the baseline for future development and defined the project's software requirements going forward.

The first phase of reconstruction in 2016-2017, designed as a fully backwards-compatible update of the software from a technological perspective, serving as a platform for larger-scale distribution. Designed to match version 2 feature-for-feature, building towards a national release.

Continued development of version 3, starting with a significant change which made version 3 and version 4 incompatible with one another. Version 4 was improved throughout 2017 and continued into 2018, and provided a number of large-scale distribution versions for national project operation.